History of Neurophysiological findings in ADHD

Attention-Deficit/Hyperactivity Disorder (ADHD) has become one of the most common neurodevelopmental and psychiatric disorders of childhood. The general rate of prevalence is reported between 3% to 7% of school age children (Cormier, 2008). In 40-60% of all cases ADHD persists in adolescence and adulthood (Faraone, Biederman & Mick, 2006). Currently, the disorder is primarily diagnosed by referring to the criteria of the Diagnostic and Statistical Manual of Mental Disorders-Fourth Edition Text Revision (DSM-IV, 1994) or the International Statistical Classification of Mental Disorders (ICD-10, World Health Organization, 1992). Attention Deficit Hyperactivity Disorder is not only the most common of the childhood psychiatric disorders but also the best researched disorder (Rowland, Lesesne, & Abramowitz, 2002). According to the DSM-IV-TR (DSM-IV, 1994), the disorder presents itself in three primary subtypes: predominantly inattentive type, predominantly hyperactive-impulsive type and the combined type.

Considerable research has been carried out investigating the neurophysiology of ADHD. The first report describing EEG findings in ‘behavior problem children’ stems from 1938 (Jasper, Solomon & Bradley, 1938). In those early days Jasper, Solomon and Bradley described an EEG pattern we now call the frontal slow EEG or frontal theta EEG: “…There were occasionally two or three waves also in the central or frontal regions at frequencies below what is considered the normal alpha range, that is, at frequencies of 5-6/sec…” (Jasper et al., 1938; p. 644). Hence this observation suggested another EEG rhythm in addition to alpha and beta described earlier by Berger (1929). We now know this rhythm to be Theta, and the term Theta was first introduced in 1944 by Walter and Dovey (Walter & Dovey, 1944). In this group of ‘behavior problem children’ they described a ‘Class 1’ as ‘hyperactive, impulsive and highly variable’ which resembles the current diagnosis of ADHD most closely. The most predominant features in this group were the occurrence of slow waves above one or more regions (as described above) and an ‘abnormal EEG’ in 83% of the cases. In this Class 1 they also reported an additional sub-group which they termed a ‘sub-alpha rhythm’ with slow frontal regular activity which occurred in a similar way as the posterior alpha (‘…In other cases a 5-6/sec rhythm would predominate in the anterior head regions simultaneous with an 8-10/sec. rhythm from the posterior regions.”). Currently it is known that alpha activity is also observed over frontal regions, which is not due to volume conduction (Broughton & Hasan, 1995). This frontal alpha is often observed during transition to drowsiness, is 1-2 Hz slower than the posterior alpha and is maximal at frontal sites (Broughton & Hasan, 1995; Conneman et al., 2005; De Gennaro et al., 2005). Given the regularity of this signal, according to the authors ‘with a regularity equal to those of the normal occipital alpha rhythm’ and the fact they described this rhythm to be ‘…normal from the anterior head regions in very young children (below two years) so that it may be related to a lack of maturation…’ suggests this activity is what is currently described as a slow alpha peak frequency (Jasper et al., 1938). Since alpha and slow EEG osscilations such as theta are considered to have different neurophysiological origins it is important to distinguish these accurately (Steriade, Gloor, Llinas, Lopes da Silva & Mesulam, 1990).

Capute et al. (1968) reported that the most common ‘abnormality’ in MBD was excessive bilateral posterior slowing, which is considered the same as a slowed alpha peak frequency. In this regard it is interesting to note that Cohn & Nardini (1958) described an EEG pattern of bi-occipital slow activity, which they related to aggressive clinical behavior. They stated that this activity: “…is sometimes sensitive, in a way similar to that of the occipital alpha output, to opening and closing the eyelids… has a distribution that corresponds grossly to that of the occipital alpha activity.” This suggests they also observed a slowed Alpha peak frequency (APF) rather than real occipital theta. Stevens et al. (1968) correlated different EEG abnormalities to behavioral profiles and found that slowing of EEG frequencies (occipital) was related to hyperactivity, difficulty with labeling simple geometric figures and poor figure-ground discrimination. Furthermore, no clear behavioral syndrome was associated with predominant, frontal EEG abnormalities, suggesting that core problems such as hyperactivity are more related to a slowed APF rather than to excess frontal slow activity (theta).

Most older studies investigating the EEG in Minimal Cerebral Dysfunction (MCD) or Minimal Brain Damage (MBD) (the earlier diagnosis for ADHD) reported incidences of around 50% ‘abnormal EEG’ as compared to control groups showing, on average, 15% ‘abnormal EEGs’ (for an overview see: Capute, Niedermeyer & Richardson, 1968; Hughes, DeLeo & Melyn, 2000; Stevens, Sachdev & Milstein, 1968). The exact implications of this high prevalence of ‘abnormal EEGs’ are not very well understood. The presence or absence of an ‘abnormal EEG’ is of little value in predicting clinical or etiological features (Stevens et al., 1968) and this group also includes children with a ‘paroxysmal EEG’ or ‘epileptiform discharges’.

The estimated incidences of paroxysmal EEG in ADHD vary between 12-15% (Capute et al., 1968; Hemmer, Pasternak, Zecker & Trommer, 2001; Satterfield et al., 1973) to approximately 30% (Hughes et al., 2000), which is high compared to 1-2% in normal populations (Goodwin, 1947; Richter, Zimmerman, Raichle & Liske, 1971). Note that these individuals did not present with convulsions and thus did not have a clinical diagnosis epilepsy, but simply exhibited a paroxysmal EEG in the absence of convulsions. In autism a prevalence of 46% to 86% for paroxysmal EEG or epileptic EEG abnormalities has been reported (Parmeggiani et al., 2010; Yasuhara, 2010), hence the earlier findings on ‘abnormal’ EEG might have been partly confounded by a sub-group with autism, since autism was not included as a diagnostic entity in the DSM until 1980 when the DSM-III was released.

The exact implications of this paroxysmal EEG activity in subjects without overt signs of epilepsy are not very well understood and many neurologists will see no need to treat these subjects as epileptics. In a very large study among jet fighter pilots, Lennox-Buchtal, Buchtal and Rosenfalck (1960) classified 6.4% as ‘marked and paroxysmally abnormal’. Moreover, they found that pilots with such EEGs were three times more likely to have their plane crashed due to pilot error, indicating that even though these people are not ‘epileptic’ their brains are ‘not normal’ and hence the presence of paroxysmal EEG continues to be an exclusion criterion for becoming a pilot. It is interesting to note that several studies found that ADHD patients (Davids, Kis, Specka & Gastpar, 2006; Itil & Rizzo, 1967; Silva, Munoz & Alpert, 1996) and patients with autism (Yasuhara, 2010) do respond to anticonvulsant medication. The reported effect size for Carbamazepine in the treatment of ADHD was 1.01, which is quite similar to stimulant medication (Wood, Crager, Delap, & Heiskell, 2007). Furthermore, some studies have demonstrated that interictal and/or subclinical spike activity has detrimental effects on neuropsychological, neurobehavioral, neurodevelopmental, learning and/or autonomic functions and some of these children with subclinical spike patterns do respond to anticonvulsant medication both with a reduction of spikes measured in the EEG and with improvements on memory and attention (Mintz et al., 2009). These findings suggest the existence of a sub-group with paroxysmal EEG, who might respond better to anticonvulsant medication; however further research is required to substantiate this.

After the introduction of Quantitative EEG (QEEG) and computerized EEG in the 1960’s by the pioneering work of Ross Adey and his group, many more studies have been carried out investigating the neurophysiology of ADHD and depression. The introduction of computerized EEG, simplified the analysis of the EEG since many complex analyses could be performed in an automated fashion. 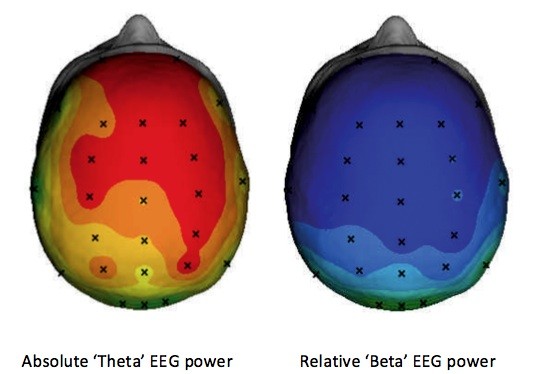 Figure 3: The averaged brain activity of 275 ADHD patients compared to a matched control group (based on the data from: Williams et al., 2010a) is shown in this figure. The figure left shows the increased theta (p<.0001) and right the decreased relative Beta power (p<.0001) where blue indicates decreased activity and orange to red indicates increased activity. This figure illustrates the most consistent finding of increased ‘theta’ EEG power in ADHD.

Lubar in 1991 laid the foundation for the concept of the Theta/Beta power ratio as a measure, which could discriminate ‘normal’ children from children with ADD, learning disorders and ADHD (Lubar, 1991). Many others investigated this measure further, with the clearest replication from Monastra et al. (1999) who demonstrated in a multi-center study in 482 subjects that using a single electrode location (Cz) they could classify with an accuracy of 88% children with ADHD based on the Theta/Beta power ratio. Since these initial findings many groups have further investigated the EEG in ADHD, mainly using computerized power spectral EEG analysis (FFT) and coherence.  Recently, we also conducted a meta-analysis on the Theta/Beta ratio and reported that this measure is not a valid diagnostic measure, also see a more recent commentary on this topic here

In contrast to the results described in the previous section on historical findings in the EEG from the pre-QEEG era, almost none of the recent studies report on alpha peak frequency (APF), but only on spectral power measures using fixed frequency bands in ADHD, whereas in the earlier studies clear relations have been reported between a slowed APF and behavioral measures such as hyperactivity (Stevens et al., 1968). It is well known that the frequency of alpha matures with age. Children 4 months of age have an APF of 4 Hz, those at age 12 months one of 6 Hz and those at age 3 years one of 8 Hz. A 10 Hz frequency on average is observed at 10 years of age (Niedermeyer & Lopes da Silva, 2004). Even in subjects older than 10 years of age a substantial variability in the individual APF is present where in some cases the APF might overlap with the fixed frequency bands labeled as ‘theta’ (4-8 Hz), which was already pointed out by Steriade et al. (Steriade, Gloor, Llinás, Lopes de Silva & Mesulam, 1990) and has prompted some researchers to individualize frequency bands based on the individual APF (Doppelmayr, Klimesch, Pachinger, & Ripper, 1998; Klimesch, 1999). Therefore, the often-reported excess theta in ADHD likely consists of both a slowed APF and real excess slow activity (theta). In chapter 2 (Arns et al., 2008) and chapter 4 (Lansbergen, Arns, van Dongen-Boomsma, Spronk & Buitelaar, 2011) this will be addressed in more detail, and the results will demonstrate that it is indeed the case that the frequently reported excess theta actually consist of 2 sub-groups, 1) excess theta and 2) a slowed APF sub-group.

The literature is less consistent about the finding of decreased absolute beta in ADHD (Callaway, Halliday & Naylor, 1983; Mann et al., 1992; Matsuura et al., 1993), although relative decreased beta has been reported more often (also see figure 3). Decreased absolute beta was not found in several other studies (Barry, Clarke, Johnstone & Brown, 2009; Clarke et al., 2001a; Lazzaro et al., 1999; Lazzaro et al., 1998) and was actually found to be increased in one study (Kuperman et al., 1996). Furthermore, some studies have also reported a specific sub-group in ADHD with excess beta ranging from 13% (Chabot & Serfontein, 1996) to 20% (Clarke et al., 1998; 2001b), and most prevalent in males with ADHD. Clarke et al. (2001c) also reported that about 10% of the excess beta group in ADHD showed beta spindles, and Arns et al. (2008) reported that 16% had beta spindles. In summary, several studies point to the existence of an ADHD sub-group with excess beta rather than a decreased beta power.

EEG as a prognostic tool: Subtypes and treatment prediction in ADHD