As pointed out in the section on ADHD, ADHD patients with a slow iAPF were found to be non-responders to stimulant medication. Furthermore,  it was demonstrated that there was a clear relationship between the iAPF at baseline and subsequent improvement in comorbid depressive symptoms as a result of neurofeedback. Arns et al. (2010, 2011) provided further evidence that this measure is a clear predictor for non-response to rTMS treatment in depression, whereas other studies have also found that a slow iAPF is related to unfavorable treatment outcome to rTMS (Conca et al., 2000), antidepressant medication (Ulrich et al., 1984) and antipsychotic medication (Itil et al., 1975). This suggests that a slow iAPF might be considered a non-specific predictor for non-response to treatments across disorders. This sub-group comprises a substantial proportion of patients (28% in ADHD (Arns et al., 2008), 17% in depression (Arns et al., 2010)) and hence the question arises: ‘to what treatment might these patients respond?’.

Neurophysiology of the iAPF

Much research has been conducted on the relationship between iAPF and cognition, for an extensive review see Klimesch (1999). Most of these studies have been performed in healthy subjects and these mainly provide information about the neuropsychological significance of this measure in ‘normal’ brain function such as its relation to memory. In this section we are specifically interested in methods that influence the iAPF in order to evaluate what specific methods might be worthwhile exploring as a treatment for the above described sub-group of patients with a slow iAPF. Hence, here a focus is laid on studies that have demonstrated to increase or decrease the iAPF, to elucidate possible treatments for this sub-group.

The iAPF is highly stable across time within subjects (Kondacs & Szabó, 1999) and is considered a highly heritable trait, with between 71-83% of the variance explained by heritability (Posthuma et al., 2001; Beijsterveld & van Baal, 2002), hence the iAPF can be considered a true endophenotype in line with the definition by Gotessman and Gould (2003) as explained in the introduction. Alpha activity has been shown to be generated in thalamocortical feedback loops of excitatory and inhibitory nerve cells (Lopes da Silva, 1991; Steriade et al., 1990). The thalamo-cortical basis of alpha suggests that the iAPF might be reflective of the cortex polling information from the thalamus, and the cortex relaying back information to the thalamus. A higher iAPF may therefore reflect faster information processing, in line with the many studies suggesting a high iAPF is associated with improved cognitive performance such as working memory (Clark et al., 2004), semantic memory (Klimesch, 1996) and with faster reaction times in complex tasks (Jin et al., 2006). Conversely, the most typical neurological syndrome exhibiting a slow iAPF is Alzheimer’s disease (AD), whereby the degree of slowing is also associated with the severity of AD (Rodriguez, Copello, Vitali, Perego & Nobili, 1999) and AD is also characterized by impaired semantic memory and working memory.

In pain research it has been found that in healthy patients noxious stimuli will acutely result in an increased iAPF (Nir, Sinai, Raz, Sprecher & Yarnitsky, 2010), possibly reflective of a ‘fight-flight’ response. Furthermore, in this study there also was a significant correlation between baseline iAPF and the subjective pain rating to the same noxious stimulus, where patients with a higher iAPF rated the same pain stimulus as more painful (Nir et al., 2010). In contrast, in chronic pain patients a slow iAPF has been reported (Boord et al., 2008; Sarnthein, Stern, Aufenberg, Rousson & Jeanmonod, 2006), however when such patients are treated with central lateral thalectomy (which resulted in 95% pain relief at 12 months) the iAPF normalized again to normal levels (Sarnthein et al., 2006). These studies suggest that even though the iAPF is a stable heritable and reproducible trait (Kondacs & Szabó, 1999; Posthuma et al., 2001), the iAPF is responsive when ‘threat’ is perceived such as pain stimuli. It can be speculated that this ‘threat’ related increase in iAPF serves the function of increased alertness in order to respond faster in threat situations. However, when a threat becomes chronic in nature a slower iAPF is observed as in the above pain studies, which has also been demonstrated in burnout syndrome (van Luijtelaar, Verbraak, van den Bunt, Keijsers & Arns, 2010), maybe serving a ‘gating function’ to reduce the amount of information projected to the cortex in order to better cope with the pain or with the information processing demands in burnout syndrome. Interestingly, when the pain is resolved a complete normalization of the iAPF occurs (Sarnthein et al., 2006).

Medication and the iAPF

Ulrich et al. (1984) reported that non-responders to antidepressant medication were characterized by a posterior slower iAPF (8 Hz vs. 9.5 Hz) at baseline, and furthermore that responders to medication exhibited an increase in iAPF, also see figure 5, suggesting that antidepressants do increase the iAPF but only in patients with a ‘normal’ iAPF to start with. 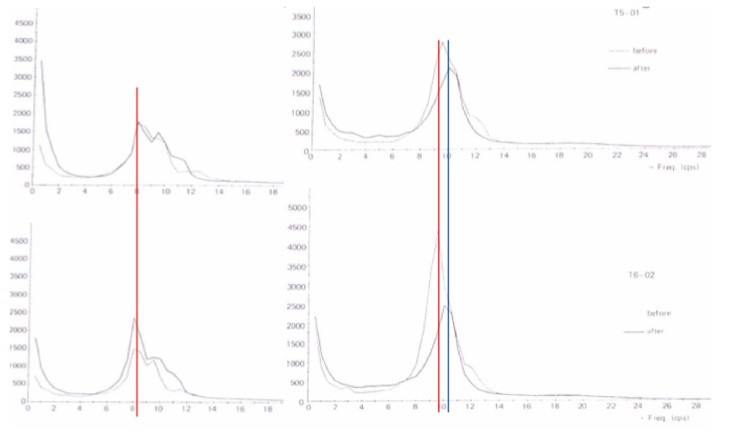 Figure 5: The power spectral plots of non-responders (left) and responders (right) to antidepressant medication at posterior sites. Note the decreased alpha power and lower iAPF (8 Hz) in non-responders. The red line indicates the iAPF pre-treatment and the blue line the iAPF post-treatment. Only responders to medication exhibited an increase in iAPF of approx. 0.5 Hz. Figure from (Ulrich et al., 1984).

Neuromodulation and the iAPF

Modulation of the iAPF by neurofeedback was first shown by Kamiya (Kamiya, 1968) and subsequent studies in healthy volunteers have clearly demonstrated that people are able to uptrain their upper alpha, suggestive of increasing the iAPF, with subsequent behavioral improvements in a mental rotation task (Hanslmayr, Sauseng, Doppelmayr, Schabus & Klimesch, 2005; Zoefel, Huster & Herrmann, 2010). However, all these studies have been performed in healthy volunteers with generally ‘normal’ iAPF’s so it is unclear if this technique could be helpful for patients with a slow iAPF. Also in chapter 6 it was not possible to draw any definitive conclusions about the possible role of neurofeedback for this sub-group on ADHD complaints, and future studies are required to investigate this.

Only one study employing 10 Hz rTMS over the left frontal cortex has reported an acute increase of iAPF, which lasted for 2 minutes (Okamura, Jing & Takigawa, 2001). However, our results from earlier studies have demonstrated that non-responders to rTMS were characterized by a slow iAPF, suggesting regular rTMS is unlikely to be a likely candidate for this sub-group. One study demonstrated in schizophrenia that rTMS at the iAPF demonstrated better effects on negative symptoms than LF or HF rTMS (Jin et al., 2006), however we were unable to replicate this Arns et al. (2010).

In 1934 Hans Berger (1934) already described a slowing of the EEG as a result of reduced oxygen (from: Kraaier, Van Huffelen & Wieneke, 1988). Since that time a decrease in iAPF is considered the most sensitive measure to demonstrate the effects of low oxygen supply to the brain such as in cerebral ischemia (Kraaier et al., 1988; Van der Worp, Kraaier, Wieneke & Van Huffelen, 1991) and carotid artery occlusion (Mosmans, Jonkman & Veering, 1983). In patients with minor cerebral ischemia with visually assessed normal EEGs, slowing of the iAPF is found on the affected side (Van der Worp et al., 1991). Carotid Endarterectomy is a procedure used to prevent stroke by correcting stenosis in the carotid artery and hence enhancing the blood supply to the brain. This procedure has been shown to improve cerebral circulation, and subsequently resulted in an increased iAPF after treatment (Uclés, Almarcegui, Lorente, Romero & Marco, 1997; Vriens, Wieneke, Van Huffelen, Visser & Eikelboom, 2000), specifically in those patients with an iAPF below 9 Hz (Vriens et al., 2000). Another study also demonstrated clear increases of more than 1 Hz in the iAPF in patients with carbon monoxide poisoning after hyperbaric oxygen treatment (Murata, Suzuki, Hasegawa, Nohara & Kurachi, 2005).

Recently, a direct relationship between regional CBF and iAPF has been established, where increased iAPF was associated with increased rCBF, most specifically in the bilateral inferior frontal gyrus (BA 45) and right insular cortex (BA 13) (Jann, Koenig, Dierks, Boesch & Federspiel, 2010). These structures are suggested to play a role in the modulation of attention and preparedness for external input or arousal, relevant for task execution (Jann et al., 2010). These results further demonstrate a direct relationship between iAPF and cerebral perfusion on one hand and their relationship to the modulation of attention and arousal on the other hand, which are also impaired in both ADHD and depression.

In this light it is also interesting to note that midazolam (a benzodiazepine) has been shown to decrease cerebral blood flow (CBF) by 30% whereas a benzodiazepine antagonist reversed this effect but had no effects on CBF when administered alone (Forster, Juge, Louis & Nahory, 1987). Furthermore, in another study, hyperbaric oxygen (which increases oxygen availability in the brain) and flumazenil (a benzodiazepine antagonist) both counteracted the EEG activation induced by midazolam (Russell, Vance & Graybeal, 1995). Given that benzodiazepines have been shown to decrease the iAPF (specifically Carbamazepine, and oxcarbazepine: Clemens et al., 2006), these studies suggest interplay between the GABA-ergic system and cerebral blood-flow.

Development of new treatments for this sub-group?

Summarizing, the sub-group with a slow iAPF in our studies and in other studies (Conca et al., 2000; Itil et al., 1975; Ulrich et al., 1984) have been found to be non-responders to various treatments. After reviewing the literature on the iAPF above, it is concluded that a slow iAPF is clearly associated with reduced cerebral blood flow and it is proposed that this measure is an endophenotype reflective of treatment resistance. Several medications have demonstrated small increases in iAPF such as nicotine and piracetam, however more studies are required to investigate if these medication effects are specific and substantial enough effects on the iAPF.

Future studies should further investigate in this sub-group of patients if any organic explanations for this sub-type exist such as cerebral ischemia, stenosis and oxygen deficiencies during birth. If such organic explanations are confirmed such causes should be investigated further and if possible treated directly to investigate if that results in a normalization of the iAPF and also resolves the depressive or ADHD complaints presented with. If such factors are ruled out, speculatively, the most likely candidate for achieving treatment response in this-subgroup is by methods which increase the cerebral blood flow, given the improvements in iAPF as demonstrated with carotid endarterectomy (Uclés et al., 1997; Vriens et al., 2000) or hyperbaric oxygen therapy (Murata et al., 2005).

Other potential techniques which should deserve further study in this regard are:

The question arises whether for these patients it is sufficient to ‘normalize’ their iAPF for their depressive and ADHD symptoms to improve, or whether the normalization of the iAPF will make them more susceptible to regular treatments, which should also be further investigated.