History of the EEG and QEEG

history of the EEG and QEEG

In 1929 Hans Berger reported in an publication his observations on what he termed ‘das Elektrenkephalogramm’ (Berger, 1929), which would become the seminal paper highlighting the beginning of research on the human electroencephalogram also abbreviated as EEG. In his first experiments he recorded the EEG from his son Klaus – among others – and described extensively the methods he used and what he observed. Figure 1 below demonstrates 2 graphs from that first publication recorded from his son. The bottom figure represents the rhythm he would eventually call the ‘alpha EEG rhythm’ and the top figure represents what he would eventually call the ‘beta EEG rhythm’. Since that time much research has been dedicated to measuring EEG under different conditions as well as measuring EEG in a variety of disorders ranging from neurological to psychiatric.

Figure 1: The first reports of the human EEG from the first publication from Hans Berger (1929). Both represent samples of EEG recorded from his son Klaus (16 years old). The bottom figure represents a sample of what he would later call the ‘alpha rhythm’ (a sinusoidal rhythm of approximately 10 Hz) and the figure above what he would later call the ‘beta rhythm’ (or a desynchronized EEG with no obvious rhythmicity). The lowest tracing in both graphs is a generated 10 Hz sine wave, and the middle tracing from the top figure is the ECG. From: Berger (1929).

In the period between the discovery of EEG in 1929 and the late 1960’s EEG was mainly inspected visually until digital equipment became available which made it possible to apply Fourier analysis to EEG data to extract the spectral content – or frequency content – of a signal. This eventually enabled the field of Quantitative EEG (QEEG) as we know it today. In the simplest form one speaks of QEEG when the EEG is submitted to spectral analysis (Niedermeyer & Da Silva, 2004). In this respect some prefer to speak of ‘Normative EEG’ to emphasize that the EEG should not only be submitted to spectral analysis but also compared to a control group and/or normative database.

The group led by Ross Adey at the UCLA Brain Research Institute in the period 1961-1974 pioneered the use of QEEG. They were the first to use digital computers in the analysis of EEG with the production of brain maps and developed the first normative library of brain maps. See figure 2 for some photos with the first equipment developed to measure EEG in outer space and during driving. As part of the Space Biology Laboratory they studied the effects of outer space and space travel on the brain, to determine whether prolonged space flight would be possible for the human body. As part of this NASA program Graham and Dietlein were the first to coin the term Normative EEG (Graham & Dietlein, 1965). In the last 20 years due to the increasing availability of affordable computer equipment with increasing calculating power, the field of QEEG has expanded even further and has become available for many practicing clinicians and clinics. Along with this, several different normative databases have been developed as well and are available to most clinicians. 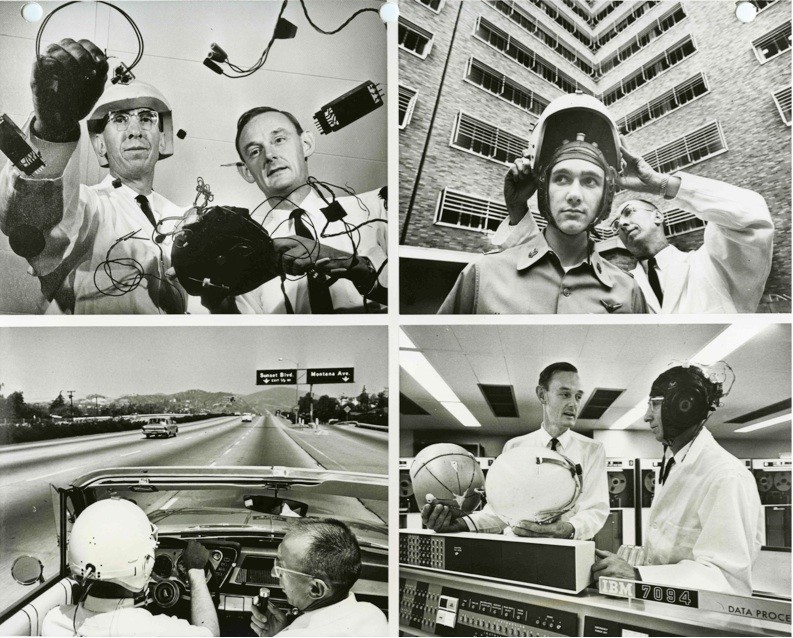 Figure 2: A photo from 1963 showing the equipment developed by Adey et al. to measure EEG in space. Ross Adey – who pioneered QEEG – is the person on the right in the top left picture. (Courtesy of the Computer History Museum)

Where we speak of QEEG we focus on normative EEG, or QEEG data that are compared to a control group or normative database. Furthermore, we will restrict our focus to the application of QEEG to neuropsychiatric conditions, whereas more strictly neurological applications fall beyond the scope of the thesis. In this chapter where we report on EEG power measures we will only report on absolute EEG unless stated otherwise. Relative EEG power measures often obscure findings making it unclear what is actually going on in the EEG, e.g. if the total absolute alpha power is decreased, it might appear as an increased ‘relative’ beta and theta power.

The history of neurofeedback

We published an excellent book on the history of the EEG and the discovery of neurofeedback
Neurofeedback offers exciting potential for understanding the brain and human behavior as well as the treatment of epilepsy and ADHD. Its rich history, from the discovery of the EEG in 1875, via the beginnings of the field of neurofeedback in 1936, to the foundation of the clinical application in the summer of 1969 is finally brought to life.
It’s a compelling read, often from an eyewitness account, in which we meet Alfred Lee Loomis, an eccentric Wallstreet millionaire, Hans Berger, a telepathy-inspired psychiatrist, a Soviet scientist’s (Vladimir Pravdich-Neminsky) encounter with Stalin, Edgar Douglas Adrian, a British Baron, a former street gang member and a group of forward thinking West Coast scientists.
Discover how they all played a vital role in shaping the future of neuroscience and neurofeedback.
Order it from bol.com, amazon or from our own bookstore.