The relationship between sleep and ADHD

Nijmegen, April 23rd, 2019 – Dutch researchers from Research Institute Brainclinics in Nijmegen and PsyQ, (Kenniscentrum ADHD bij volwassenen) in The Hague, discovered a striking link between light, sleep and ADHD, as can be read in two recent scientific publications. They published a study showing that ADHD can be a cause or a consequence of a disturbed sleep-wake rhythm. This new insight can be of great importance in the treatment of ADHD.

The importance of sleep

Three out of four adults and children (± 75%) with ADHD have difficulty falling asleep.

This sleep-wake disorder has major consequences for health, concentration and daily functioning: if you lie awake longer, you wake up less refreshed the next day, fatigue increases, and your school or work performance and concentration diminishes.

The orange line in Figure 1 shows how fatigue increases during the day. After you have slept, tiredness decreases. This is called sleep pressure. Ideally, sleep pressure and the biological clock are in sync. 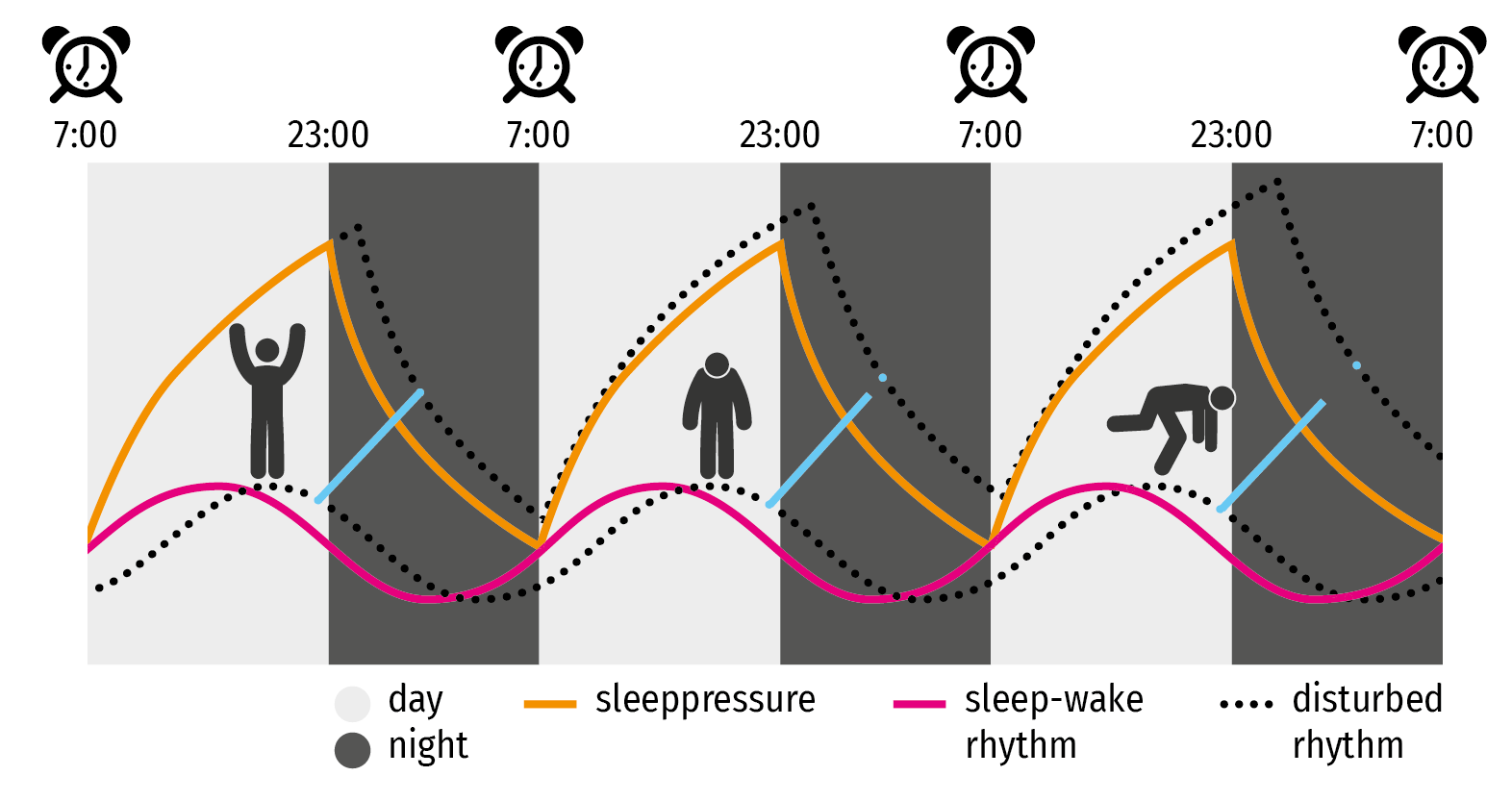 How the circadian rhythm can be disturbed

Melatonin, the “sleep hormone”, plays an important role in regulating the sleep-wake rhythm. The amount of melatonin your body releases is determined by the amount of daylight exposure. At the end of the day, when daylight decreases, you release more melatonin that makes you more sleepy assuming disturbing factors play no role. The use of modern media can be considered such a disturbing factor. Tablet and smartphone screens, but also LED lights, radiate blue light that falls in the same spectrum as daylight.If you use those in the evening, the body will postpone and lower the production of melatonin. The result: you will fall asleep later (sleep delay), and because your alarm clock (due to daily obligations) goes off at a regular time, you effectively sleep fewer hours.

The consequences of a (too) short night’s rest (sleep restriction) are often underestimated, but the result of a few hours’ missed sleep every night is comparable to staying awake for 48 hours (sleep deprivation), with all the associated negative effects. While the adverse effects of sleep deprivation are well known, with sleep restriction people are not aware of the same symptoms (for example, reduced concentration and vigilance).

Figure 2: Consequence of exposure to blue light just before going to sleep: A pathway is depicted in which LED light exposure results in a sleep-onset delay, which in turn negatively influences the amount of time spent sleeping, which ultimately leads to worsening of attention.

Sleep problem as a cause and effect of ADHD

The functional and neuro anatomical overlap between brain areas involved in attention, alertness and sleep regulation reflects the complex relationship between ADHD and sleep.

A sleep problem can be either cause, effect or intrinsic characteristic of ADHD. An example: young children who are very tired become very energetic. Here, drowsiness is the cause of hyperactivity. However, ADHD can also be the cause of problems falling asleep: for example, problems with inner unrest, grinding, or pressure in the head. It could also be that ADHD and sleeping problems both stem from the same underlying problem.

Similarities between ADHD and sleep disorders

How do you resolve sleeping problems?

Sleep problems related to mood or anxiety disorders can be reduced by addressing the causes. Sleep problems due to a chaotic lifestyle, which is generally a characteristic of ADHD, can be reduced by the medical and psychological treatment of ADHD itself. Improved sleep hygiene (no tablet or smartphone use in the hours before bedtime, no coffee in the evening, regular bedtimes) is very important. The preferred treatment for insomnia is a cognitive behavioral treatment (CBTi), which focuses on good sleep hygiene, good bed-sleep association and relaxation training, among other things. CBTi has been proven to be very effective for symptoms of insomnia and sleep quality improvement, is safe, has no side effects and is therefore preferable to sleep medication. Chronotherapy, for example through the administration of light therapy or melatonin, certainly has a positive effect on children with ADHD in the longer term, as has neurofeedback.

Improving sleep quality has a favorable effect on ADHD symptoms and it is therefore advisable to include such a focus in ADHD treatments. In addition, the term ADHD is too general: because ADHD is so often associated with sleeping problems, the authors propose to create a separate DSM-5 classification for this category: ADHD-SOM (derived from somnus, or sleep), which enables specialists to propose a much more focused and personalized treatment.