Meta-analysis confirms sustained effects of neurofeedback in children with ADHD

Nijmegen, February 16th, 2018 –  An international group of researchers conducted a meta-analysis that systematically looked at all available studies and found that after an intensive course of neurofeedback, the clinical benefit of neurofeedback on ADHD symptoms was maintained over a 6-month follow-up period (without treatment). At follow-up the effects of neurofeedback were not inferior to active treatments such as medication, whereas benefits for non-active control groups (such as cognitive training) were no longer present at follow-up. These results have now been published in the scientific journal European Child & Adolescent Psychiatry.

Neurofeedback is a treatment where real-time feedback is provided on specific brain activity (most often the EEG) and based on learning principles participants learn to control specific types of brain activity. Based on the notion that this treatment is based on learning principles, it is expected that it should result in long-term benefits, however durability has not been systematically investigated. Given treatment with medication in ADHD is effective in short-term symptom management, and clinical benefit is likely to diminish after sustained use for more than 2 years, there is a need for treatments that result in better long-term benefits. Therefore, an international group of researchers from The Netherlands (Utrecht University, Research Institute Brainclinics, Radboud University), Germany (University Hospital Erlangen; kbo-Heckscher-Klinikum, Tübingen University, neuroCare Group), and the United States (UCLA), conducted a systematic-review and meta-analysis to investigate the long-term effects of neurofeedback and different control groups, including medication. This research group was selected to include scientists with different views on neurofeedback to interpret the data in a balanced and critical manner.

In this study, researchers compiled data of more than 500 children with ADHD comparing the results of neurofeedback, active (incl. medication), and ‘non-active’ control conditions from 10 randomized controlled studies (RCT’s) and clinical benefit was assessed after a follow-up period of on average 6 months after treatment was finished. It was found that neurofeedback resulted in a large effect on inattention and medium effect on hyperactivity/impulsivity at follow-up and at this time-point there were no differences between neurofeedback and active-treatments. For non-active controls a small effect was found only on inattention that disappeared at follow-up. Numerically, the benefits of neurofeedback tended to improve from outtake to follow-up, which was not the case for the other treatments. Furthermore, for the medication groups, medication was still used in the 6 month interval to follow-up, whereas for neurofeedback no additional treatment sessions were administered in that interval.

Concluding, these results suggest that clinical benefits achieved with neurofeedback in children with ADHD have durable effects at least over a 6-month period without treatments, positioning neurofeedback as a promising treatment with long-term benefit.

Note: The results from this meta-analysis mainly apply to the specific protocols investigated and might not generalize to other ‘experimental’ approaches implemented in many ‘neurofeedback clinics’. Currently, there is most consistent evidence for Slow Cortical Potential (SCP), Theta/Beta (TBR) and Sensori-Motor Rhythm (SMR) neurofeedback, see figure below for explanation. 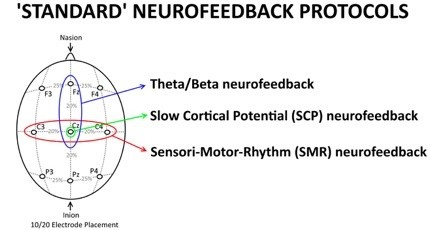