EEG and QEEG: Models and Theory

There are several models and theories that make an attempt at integrating the different findings or relating EEG patterns to treatment outcome. More specifically these are the ‘EEG Phenotype model’ initially developed and published by Jack Johnstone, Jay Gunkelman and Joy Lunt (Johnstone et al., 2005) and the ‘EEG Vigilance Model’ which was initially developed by Dieter Bente (Bente, 1964) and which is currently further investigated and developed by Ulrich Hegerl and his group (Hegerl et al., 2010; Hegerl, Olbrich, Schönknecht & Sander, 2008). In the following sections these models are explained in more detail focused on their application in ADHD and depression.

The regulation of vigilance and its flexible adaptation to internal and environmental needs are of fundamental importance for all higher organisms. Vigilance has to be adapted to the respective environmental situation, ensuring a high vigilance level in situations of danger and a reduced vigilance level during times of recreation. However, the interplay between environment and vigilance regulation also works the other way around: The environment actively created by a person can also depend on vigilance regulation. If the capacity of the brain to maintain a high vigilance level is reduced, a person will normally feel sleepy and thus seek an environment with low external stimulation and a chance to sleep. However, under certain circumstances such an unstable vigilance regulation can also induce a compensatory behavioral pattern termed here as ‘vigilance autostabilization behavior’. Hyperactivity, sensation seeking and other behavioral patterns create a highly stimulating environment. The resulting increase in external stimulation counteracts the impending vigilance decline and leads to a stabilization of vigilance. An everyday example would be the hyperactive, “high-spirited” behavior of overtired children. Related to this, mania has been described as sensation seeking gone out of control. By contrast, in times of a tonically high vigilance level, a person might avoid additional external stimulation and withdraw himself as autoregulatory behavior. The proposed concept of vigilance autostabilization behavior is related to earlier theories of brain function (Bente, 1964; Ulrich, Renfordt & Frick, 1986; Wundt, 1896), personality (Zuckerman, 1985) and sensation seeking (Eysenck, 1990).

In parallel to the transition from active wakefulness to deep sleep the human brain takes on different global functional states. These functional states are reflected in the spectral composition and topography of the EEG and have been termed vigilance stages. These states correspond to different levels of alertness at the behavioral level. Several stages can be separated during the transition from tense to relaxed wakefulness and further on to drowsiness until sleep onset.

In 1937, Loomis et al. (1937), later modified by Roth (1961), Bente (1964) and others (e.g. (Klimesch, 1999; Ulrich & Frick, 1986); proposed classifications for vigilance stages occurring during transition from active wakefulness to sleep onset. They are based on the following EEG phenomena during eyes closed, which have been demonstrated in several studies:

A1) Posterior alpha mostly seen after eye-closing with a frequency of 8-12 Hz and an occipital focus. This oscillation has been referred to as “idling rhythm” (Niedermeyer, 1997) because it marks a state of relaxed wakefulness, corresponding to vigilance stage A1 according to Bente (1964) and Loomis (Loomis et al., 1937).

Based on these EEG features a computer-based algorithm has been created for separating different EEG-vigilance stages (also see figure 4) for consecutive EEG segments. The first version of the algorithm “VIGALL” (Vigilance Algorithm Leipzig) was based upon the Fast Fourier-derived power of the four main EEG frequency bands alpha, beta, delta and theta during two-second segments of continuous EEG data at different sites. An improved second version of the algorithm now takes into account the intracortical source power (derived by Low Resolution Tomography-LORETA) of different regions of interest (ROIs). 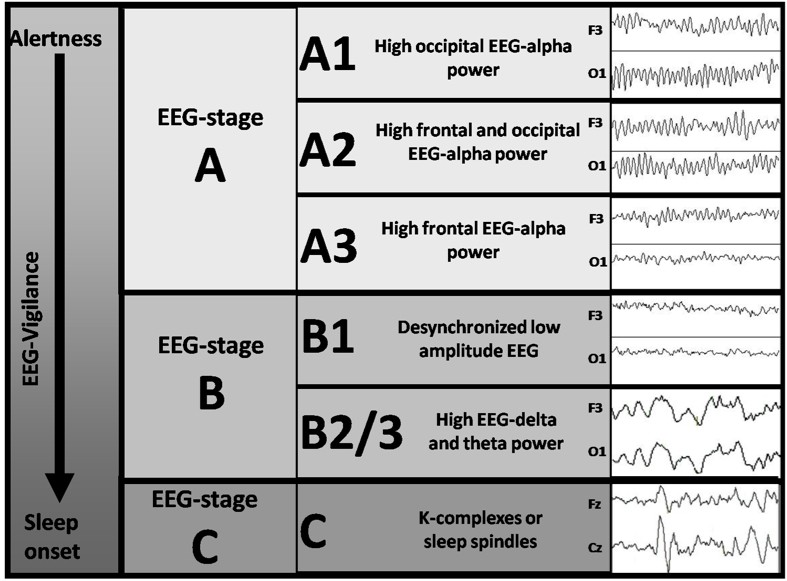 Several studies have further validated the EEG Vigilance model. Given the above stages and their relation to Vigilance, it is expected that switches between neighboring stages occur more often than switches to more distant stages, which was clearly demonstrated to be the case by (Olbrich et al., 2009) also see figure 5. This study demonstrated that switches between neighboring stages occurred significantly more often than a random process would reveal. These findings underline that the vigilance stage sequences during rest follow a certain order and give further validity to the EEG-vigilance algorithm VIGALL. Furthermore, Olbrich et al. (2009) also demonstrated that autonomic measures such as heart rate, also was lower for lower vigilance stages (e.g. B stages) as compared to higher vigilance stages (e.g. A stages). 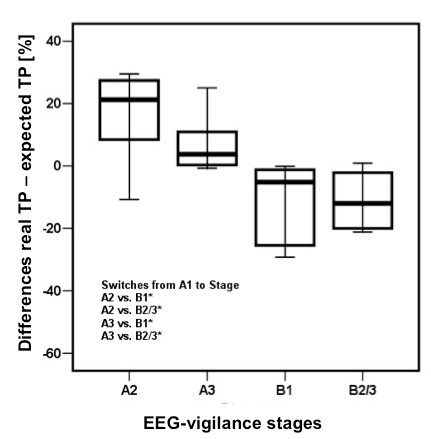 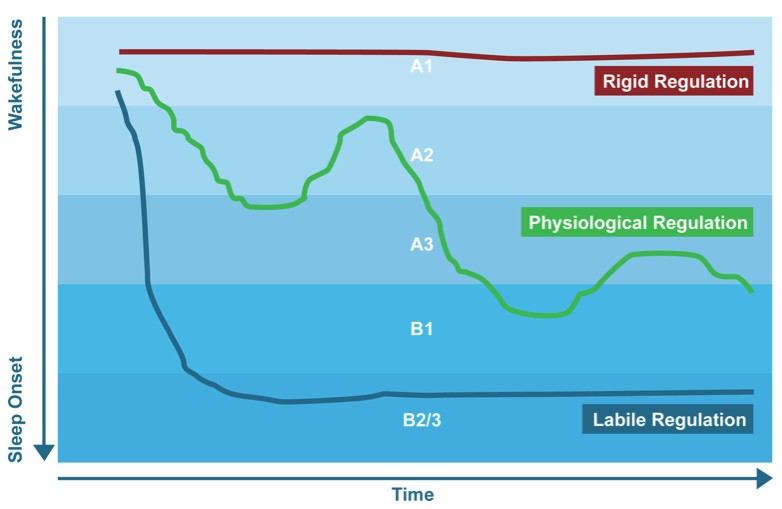 Manic patients do not appear to be sleepy or tired. When evaluating EEG recordings of such patients, one would expect to find signs of a cortical hyperarousal. However, when studied under resting conditions with eyes closed, acutely manic patients consistently show rapid declines in vigilance within the first minute of EEG recording (Bschor, Müller-Oerlinghausen & Ulrich, 2001; Ulrich, Haug & Fähndrich, 1994; Van Sweden, 1986); a sub-group (19%) even shows signs of micro sleeps (defined as abrupt intrusion of sleep spindles) within the first 10 seconds into the EEG recording (Small, Milstein & Medlock, 1997). This finding generally has been neglected in theories on the pathophysiology of mania and is difficult to incorporate into current concepts. It does not appear to be a mere consequence of the sleep deficits often occurring within manic episodes. Instead, a causal role of the vigilance impairment in the pathomechanism of mania is suggested by the fact that sleep deficits can trigger or worsen hypomanic and/or manic syndromes in patients with bipolar disorders (BD)  (Barbini, Bertelli, Colombo & Smeraldi, 1996; Hegerl et al., 2008; Wehr, 1992). Some symptoms of mania can be interpreted as autoregulatory reactions of the organism aimed to counteract the vigilance instability by increasing the level of external stimulation. While this might lead to vigilance stabilization, in many cases a vicious circle is initiated since this behavioral syndrome and the associated lack of sleepiness may aggravate the sleep deficit as well as the instability of vigilance regulation resulting in a vicious circle. According to this concept, most publications on treatment of mania using vigilance stabilizing agents such as Ritalin and modafinil reported an improvement within one or two hours of first dose (Beckmann & Heinemann, 1976; Brown & Mueller, 1979; Schoenknecht, Olbrich, Sander, Spindler & Hegerl, 2010).

Figure 7: Time course of EEG-vigilance stages for consecutive two second segments of a ten minute resting EEG in a patient with bipolar affective disorder during a manic episode (top; Young Mania Rating Scale 23) and during a depressive episode (bottom; Hamilton depression Score 22). Labile vigilance regulation is found during the manic state while during the depressive state the vigilance level does not drop to low vigilance stages. Vertical red lines mark segments with artifacts.

Taken together, these data – along with the earlier reported EEG findings found in ADHD – suggest that a labile vigilance regulation is a pathogenic factor in ADHD. Some symptoms of ADHD can be seen as a direct result of the unstable vigilance regulation (deficits in sustained attention, distractibility), while other symptoms (e.g. hyperactivity, “sensation seeking”) can be interpreted as vigilance stabilizing syndrome, as is summarized in figure 8 below. Therefore, the well-documented effectiveness of psychostimulants in pediatric ADHD (Faraone & Buitelaar, 2009; Pliszka, 2007) is most likely explained by its vigilance stabilizing property.

Figure 8: This figure provides an overview of the relation between an unstable vigilance regulation and the behavioral symptoms of ADHD (adapted from Hegerl et al. 2009).

As described earlier, the concept of endophenotypes was coined as early as in 1966 by John and Lewis (1966) and further developed based on studies in schizophrenia by Gottesman and Shields (1967; 1972). The idea behind an endophenotype is that it is the intermediary step between genotype and behavior and thus is more closely related to genotype than behavior is. Endophenotypes can be investigated to yield more information on the underlying genotype. In parallel there have also been many studies using the term biological marker, trait, biomarker etc. Here it is important that in line with Gotessman and Gould (2003), an ‘endophenotype’ refers to a marker when also certain heritability indicators are fulfilled, whereas a ‘Biomarker’ simply refers to differences between patient groups, which do not necessarily have a hereditary basis.

In 2005 Jay Gunkelman and associates submitted a paper proposing a set of EEG patterns as “EEG phenotypes” when the genetic links were known, and as “candidate EEG phenotypes” when the linkage to genetics remained unknown (Johnstone et al., 2005). These proposed EEG-based phenotypes are stable states of neurophysiological function, and can be identified from the raw EEG waveforms. The authors proposed a framework, which permitted researchers and clinicians to describe much of the observed EEG variance with a small number of categories of phenotypical divergence. These groupings are not identical to the DSM-IV groupings, and they are observed to cut across the DSM-IV categories. Unlike the DSM-IV, these phenotypes were observed to predict an individual’s response to both neurofeedback and medication approaches to therapy.

The literature on medication response prediction suggests that a phenotypic perspective may help enhance efficacy when prescribing medication, as seen in the work by Suffin & Emory (1995) who demonstrated that patients with frontal theta responded better to stimulant medication and patients with frontal alpha responded better to an antidepressant, irrespective of their DSM diagnosis. This method is referred to as referenced EEG or rEEG, and its efficacy has recently been replicated in a larger controlled study (Debattista et al., 2010). Furthermore, Prichep et al. (1993) found the same results in Obsessive Compulsive Disorder (OCD) where OCD patients with excess alpha responded better to an SSRI, as compared to OCD patients with excess theta. Improved outcomes may also be seen in neurofeedback, as demonstrated in the clinical outcome improvement reported by Wright and Gunkelman (1998) when they added the EEG phenotype approach to guide neurofeedback. Using a slightly different approach, Monastra, Monastra and George (2002) demonstrated that using a pre-selection on excess theta/beta ratio in an ADHD population also improved treatment outcome to neurofeedback (resulting in a doubling of the effect size) employing theta/beta neurofeedback, further supporting this notion.

Table 1: A summary of the EEG Phenotypes originally proposed by Johnstone, Gunkelman and Lunt (2005). The top part of the table represents EEG Phenotypes for which hereditability and/or genetic linkages have been reported (also summarized below) and the bottom part reflects ‘candidate EEG phenotypes’ for which more research is required to establish clear hereditability and/or genetic linkages. 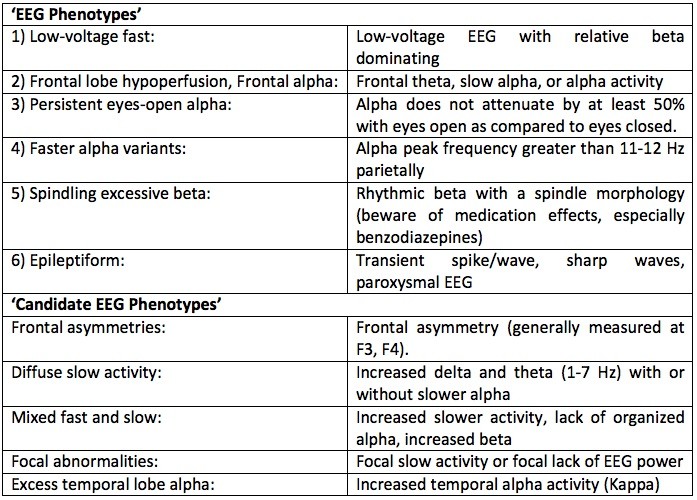 Many studies have investigated the heritability of the EEG in twin studies and family studies (see: Martinovi, Jovanovi, & Ristanovi, 1997; Vogel, 1970), and found that many aspects of the EEG are heritable. In a meta-analysis van Beijsterveld and van Baal (2002) demonstrated high heritability for measures such as the APF (81%), alpha EEG power (79%), P300 amplitude (60%) and P300 latency (51%), all suggesting that EEG and ERP parameters fulfill the definition of an endophenotype. Table 1 shows an overview of the original EEG Phenotypes proposed by Johnstone, Gunkelman and Lunt (2005). Below a summary is provided about what is currently known about the specific EEG Phenotypes as proposed by Johnstone, Gunkleman and Lunt (2005) and their underlying genetics and heritability:

The EEG phenotype model demonstrates overlap with the EEG vigilance model, where in the EEG Phenotype model an EEG is described as its predominant feature (e.g. frontal alpha, frontal theta) the EEG vigilance model describes these as part of a continuum of vigilance. This thesis will investigate both models and aims to integrate findings from both models in their relation to predicting treatment outcome in ADHD and depression.

One critical point must be remembered when viewing the listing in table 1: the various phenotypes may coexist. The various combinations of the phenotypes are too numerous to be handled completely in this limited chapter presentation. Thus, this list should not be construed as a replacement for professional assistance in designing a neurofeedback intervention or in prescribing medication, nor in any way can this be used to fully characterize an individual’s EEG/QEEG.